Mario Kart Wii, this one is worth it

My trip through video game history maybe somewhat different. My first console was a classic NES, as it was for many. However, my next console after the NES was the Playstation. I didn’t have a Super NES, a Genesis, or anything in between. After the NES I got into PC games and didn’t stray from that until Playstation hit it big. After Playstation I became a Sony loyalist, I guess, as I then bought the Playstation 2. When the most recent batch of “next gen” consoles came about I traded in my Sony card for a Nintendo card. It sort of felt like going back home, back to my roots. I had abandoned Nintendo for many years and looking back, it was a good choice, frankly. At that time my gaming passion lied in fighters, shooters, driving, and just about everything else but sports. Nintendo didn’t offer much in any of those areas…at least not the caliber Playstation did. In some ways this is still true, but this time around it doesn’t bother me as much.

Since I skipped many consoles during my PC Years, I failed to get involved into any of Nintendo’s franchise games, like Mario, Zelda, Metroid, Kong, etc…I was too busy Starcraft-ing and Quake-ing. So when I got my Wii and all these franchise games got released, I wasn’t going head-over-heels for them. Any familiarity I had with these games goes back to the original NES, where most of these games were born, so when you say “Zelda,” the vision I get is me trying to find the right bush to burn with my blue candle. The two most recent Wii games I’ve purchased, Super Smash Bros. Brawl and Mario Kart Wii are also franchise games, but the problem is these franchise were started way after the NES, but in the end I trusted Nintendo’s long standing record of producing good games. I got burned once, but not twice. 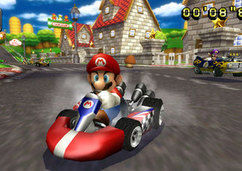 Smash Brothers was a disappointment and it was a lesson learned well. I love my fighting games, but Brawl is not a fighter in my eyes. I should have known better and done some more homework on the game, but live and learn. However, with Mario Kart Wii – also a game that started where I wasn’t – I knew it would be a pretty safe bet. Mario Kart is a racing game that (from what I hear) is just a clone of previous Mario Kart games, which keeps those fans happy. But my familiarity with kart racing doesn’t come from Nintendo, but from Sony and their Krash Bandacoot racing games…of course, Krash was just a Mario Kart rip-off at the time…but nonetheless, Krash prepared me for Mario Kart Wii and thus I knew exactly what I was getting into.

If you haven’t played any go-cart game before either on Nintendo or Sony, then I’m not sure what to say…except maybe, where’ve ya been?! Safe to say Mario Kart Wii hits that sweet spot where serious gamers can enjoy it, but just about anyone else can jump in as well. Your favorite Nintendo characters are there (my fav is Donkey Kong) and each have their own strengths and weaknesses, as expected.

Mario Kart Wii is a title every Wii owner should get. Don’t bother with Brawl, get Kart. It’s not a serious racing game, you’ll never find one of those on Wii, I’m sure – but Kart is a lot of fun and shines when you play with a lot of people (up to 12). Fortunately, the Nintendo WiFi works really well with Kart making your on-line gaming experience top notch. There are, of course, single-player racing and challenges, but they serve no real purpose beyond unlocking hidden features in the game. And as I’ve found very quickly, racing against the computer is hard. Not because you can’t get out in front, but if you’re leading a race on the last lap, just be prepared to get stopped less than 50 feet from finish line. It is most annoying and very frustrating. Right when you think you’ve got it, lightning, turtle shells, and bananas fall from the heavens to stop you, leaving with a 5th place finish if you’re lucky.

The on-line play for Kart is really neat, shy of the nagging friend codes you need to play with your buds. But once you do have your friends all registered, Kart makes it very easy to join them. If you’re friend is already on-line and playing when you start, you can choose to “Meet Up” with them and join in their race, which is very handy. Coming Brawl and even from Guitar Hero where your on-line play is very random, this simple little feature is wonderful. Kart is also nice because the number of players per race will change as people come and go. So in your first race you could have 12 racers and in the next only seven. Another bonus for on-line play is the ability to have 2-player on-line mode, where you and your friend play on the same console but both on-line from that console. Player one is the “leader” and player two is denoted as a “guest” when playing. It’s nice to have a game that lets two enjoy on-line without having to wait your turn. And while it’s not a killer feature, it’s kind of nice that you can choose to play people within your region (country) or anyone globally. 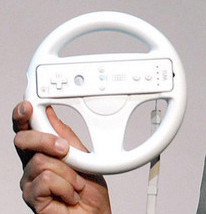 Now…the gimmick with Mario Kart Wii was the Wii Wheel. The advent of the wireless Wii Remote opened up a floodgate of superfluous accessories that you can plug your remote into. Some of them are nice, some of them are great, but most are just stupid. The Wii Wheel falls in the stupid category. But I think it falls there because I’ve spent so much time racing elsewhere without the wheels. New players may actually enjoy the wheel. As it was told to me, cars are meant to be driven with wheels, not arrows – so for those people, the wheel is for you. Thankfully, the Wii Wheel came with the game honestly doesn’t cost you extra. And actually, I’m glad I don’t like the wheel because my wife does, which means we can both play happy. Since I don’t have a classic controller or Gamecube controller, my preferred scheme is remote+nunchuck. Using an analog joystick for driving is just perfect.

So while Nintendo let me down with Brawl, that was my fault as I wasn’t familiar enough with the franchise to know it sucked. But I knew Kart would make up the difference. I just hope my copy of Brawl will get me some decent in-store credit, should I decide to give it up. Oh, and for you other Wii Kart racers, I race as AngryEdisn and usually do so regionally (which would be North Am.). I’ll see you on the track!