Pinball needs to make a comeback

Growing up I always loved playing pinball. Whether it was at the arcade or the movie theatre, or even at the back of Max & Erma’s…pinball is one of those games that anyone can play and be reasonably good, but it takes a lot of time and patience to be great – at a lot of quarters. Unfortunately, as a kid I didn’t have much of any of that stuff. My pinball games were usually less than five minutes and probably a waste of a good fifty cents. Of course, the best part about pinball were the tables themselves with all the lights, buzzers, spinning things, score board animations…it was a real sensory overload.

A common problem with most of the pinball machines I saw and played with was that they were all broken somehow. Whether it was a light that didn’t flash, a spinner that didn’t spin, or some neat decorative toy was always hanging vicariously and threatening to fall on the board. Some how, some way, the tables were just not as they should be and thus I usually didn’t trust them. And I’m sure somewhere on everyone’s list of “things I would love to have in my home” is a pinball machine…right?! You know it was there as some point, along with a fooseball table and ski ball.

Well, stand-up arcade games and pinball machines are quite expensive and well beyond the reach of normal people, so the next best thing is a video game. When I saw the Williams Pinball Hall of Fame Collection game for Wii at Target for $20, I had a hunch it would find its way into my shopping cart. So I went back home to read a few reviews and everything was positive, so I went back and grabbed it – and the $20 price tag doesn’t hurt one bit. The game isn’t fancy or anything, it’s just pinball. It includes 10 of the best tables ever, including Taxi, Space Shuttle, and my favorite, Pin*Bot.

I always loved playing on the Pin*Bot table. It just looked cool. It wasn’t the most pimped out table, but it had a really cool robot face in the middle that opened up. I probably liked it because the robot face looked like a cross between Cobra Commander and one of the android/zombies from The Black Hole. The neat part was his face shield would open up if you hit all the right targets and then you could stash your balls in the exposed eye sockets. Really neat. It wasn’t a terribly hard table, but it was tough to get that face shield open. 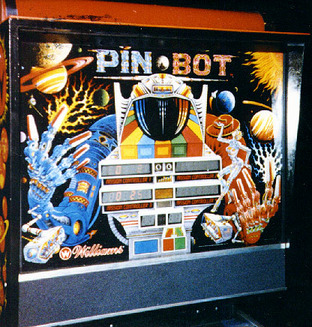 All the tables in the game are reproduced as accurately as can be expected. It includes all the original sounds, patterns, and everything else. About the only thing you don’t see while you’re playing is the display sign. You still see the score/bonus numbers but not in conjunction with the sign art…a bummer, yes, but not essential. In fact, the tables play so realistically that I actually managed break the Pin*Bot board! I got the face shield open and managed to hit the two multi-balls into the same eye socket and then the face shield closed, leaving me without a ball in play. So I waited a bit for the face shield to open and shoot out one of the balls, too bad Pin*Bot had a different idea – it kept them! So again I was without a ball in play. So I waited for it to open again hoping it would finally figure things out, but that was asking too much. Then one time when it opened I tried to shake the table a bit thinking I could shake lose one of the balls. A good idea but I ended up shaking a bit too hard and tilted the tabled, ending my turn. The tilting solved my problem but I was bummed it cost me a ball.

I think it’d be really cool if (real) pinball made a come back. I mean a serious come back to the point where they start making new tables again and bars/arcades flourish with weekend tournaments and everything. Nostalgia is a force to be reckoned with these days and I’m sure pinball is due for a rebirth. As long as they keep the play cost low enough to get people to play. A dollar to play is a little on the high side if you ask me, especially for your standard three-ball play. People will always sell themselves short when it comes to pinball playing skills, so you need to make them feel good when they lose quickly, but then allow them to feel like a wizard when they get a high score off a mere fifty cents.

If you remember a time when there were arcades and pinball was still cheap and enjoyable, then the Williams Collection game is certainly a cherry pick and a bargain price. Of course, you have to turn the volume crazy loud so you get close the arcade atmosphere. Smoking a few cigarettes so you get that low-hanging haze will help too. And then ask the teenager that lives across the street to wear a black trench coat and stand in the corner looking pissed off and full of angst…that should be all you need.