I was happy when I heard about Nintendo’s WiiWare service because it told me Nintendo was finally hopping on the download bandwagon. So far, while Nintendo’s on-line play has been wonderful, it’s offerings for downloadable content (DLC) has been less than stellar. While Xbox and Playstation players happily download new songs, new games, and other goodies, us Wii owners are left wondering why Nintendo just doesn’t make a hard drive to solve the problem once and for all. WiiWare appears to be a compromise.

WiiWare doesn’t offer DLC for existing games you have, it offers entirely new games to download. This doesn’t quench my thirst for new Guitar Hero songs, but it does let me conveniently download games on the cheap. Of course, the PC has offered this since the shareware days 15 years ago, so it’s nice to see consoles finally catch up. As the time for WiiWare’s launch came closer and games were announced, it was nice to see a “real” game as part of the offerings.

Star Soldier R (SSR), a classic arcade-style shoot-em up, was listed as a WiiWare launch game. Better yet, it was only going to sell for $8.00, a deal no matter which way you cut it. Well, SSR didn’t make the launch list, but it did come a week later and so now SSR inhabits a channel on my Wii menu. And so far, SSR is the best $8.00 I’ve spent on a video game ever.

Star Soldier is a franchise series that started back on the classic Nintendo. And surprisingly enough, it’s not one I’ve played on the NES before – not even as an emulator ROM. But from the screen shots of SSR, I knew it would be a game I’d want. I love the shoot-em up games. They’re quick, easy to jump into, and usually very visually overloaded…and SSR is no different…well, almost. 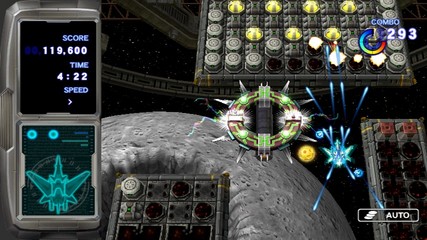 Star Soldier R is not a full game, so to speak. There’s no story mode, or co-op play, or even any secrets to unlock. It’s an arcade game tried and true. This incarnation of SSR is really for the die hard shmup fans like me, because the whole point of the game is to get a high score. Straight up. The game has two modes, 2-minute mode and 5-minute mode, and as the names might suggest, you have either two or five minutes to get the highest score you can. Once time is up your score is saved and you can post it to global and regional leaderboards via the wi-fi connection. Honestly, without the leaderboard submission this game would be less of a jewel. Sure, competing against yourself has its motivation, but when you can see other scores you’re pushed just enough to keep trying until you beat the guy in front of you.

So if you’re looking for an involved game with tons of weapons, characters, music, and cut scenes, SSR is not for you. And if you’re not a person that is motivated by high score competition and repetitive play, it’s not for you either. But if you’re looking for a game that’s fun, fast, and very affordable, then SSR should be on your WiiWare short list. The game has only been available for about two days now, but after playing in both modes for an hour or so, I found my score had me ranked 12th within the Northeastern region. Then checking the on-line scores today, I found my score had me ranked 62nd out of all regions. However, as of this writing, I’ve been pushed back to 77th overall out of 1,000 or so scores (I submit scores as MTOAST). So as you can see, the fact that your high score may only last a few hours before you fall more spots keeps you motivated to play.

This was my first WiiWare purchase and I must admit the buying process was dead simple. I still haven’t purchased any Virtual Console games yet, although there are some I’d really like to have. I first thought I had to go get a Wii Points card to buy on-line, but turns out you can use your credit card right from the Wii Shop channel and everything is as easy as you’d expect.

WiiWare will prove to be Nintendo’s saving grace. The first-party shelf games are top notch, but other than those, titles on the Wii have been spotty at best. WiiWare opens up a whole new door for developers to push their wares onto the growing masses that have become casual gamers. You’re certain to find Flash-esque WiiWare titles as the weeks go on. The games you’d spend hours clicking through on your computer will be ported to the Wii so you can then spend that time on your couch instead. There should also be some solid traditional game offerings (like SSR) as time goes on. And with seemingly no WiiWare game costing more than $20, the risk of worrying about poor games is very reduced. As I said, the $8.00 I paid for SSR was a no-brainer, and even if the game had been less than it is, it’s still worth the $8.00.

The Nintendo Wii will never become a Gamer’s console. I’ve accepted that. There will probably never be any good support for DLC for my Guitar Heroes, Rock Bands, and whatever else comes down the mainstream pipe. But if Nintendo (and others) can deliver affordable, quality low-fi games on a weekly or even monthly basis, then my Wii wallet will be opening a lot.

Published in Archive and Playing Games