Why I can’t stand college football

It’s football season and I really hate football. Actually, that’s not entirely true. I hate college football. A large part of this hatred comes from the fact that I work for a company (and in a town) whose economy is almost entirely based on college football. So not only do I have to deal with the idiots on the streets, I have to deal with clients at work that can’t find anything better to do than give out football tickets and other Ohio State crap. Every year between August and January my angst for college football goes into overdrive. I see scarlet and grey in my dreams while Brutus Buckeye laughs all the way to the bank. For years I’ve pretty much just said, “I hate football,” but this year I’m giving pro football a bye.

A topic came up on sports talk last week that got me thinking about college versus pro football and why I can stand to watch the NFL but can’t stand college games. And it boils down to what professionals are allowed to do and what college athletes cannot do. In short, pro athletes can show off, college kids can’t.

When I watch the NFL I see players that are characters, personas. I see men that are larger than life and that, for lack of a better term, perform. I also see players that feed off the crowd and play for the crowd. You’ll find none of this in college football, and not because the players are void of excitement and character, but because they’re just not allowed. It’s against the rules. That’s not saying the players aren’t feeding off the crowd, it’s that they can’t show that they’re feeding off the crowd.I want to see the players having fun, expressing themselves, and playing for the fans. Which team ends up winning is of little consequence. NFL football is spectacle. College football is, well, boring.

The only redeeming value in college football are the fans, and that’s only because they are all nuts. Watching fans revel in their fandom is often more entertaining that the games themselves. I believe Columbus is a special place because 8 out of 10 people you meet on the street seemingly bleed scarlet and grey. This town lacks any sort of (good) professional sports team and the college is the reason. Pro teams just don’t have a chance here – just ask the Blue Jackets. Everyone seems to think being an OSU fan makes you part of some special club, but is it really that special if everyone is in the club? 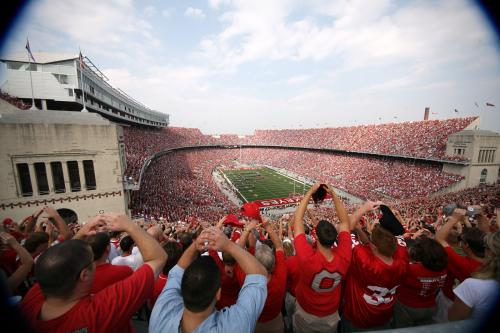 Maybe I’ve just been watching wrestling for too long, but competitions are far more interesting and exciting when you’re watching a show and not just a game. The “show” is created by the players and their actions, the fans and their reactions, and off-the-field stories. However, I do feel the off-court shinanigans of pro players are getting a bit out of hand, such as the Favre soap opera — but in the end it does make for great entertainment. But to be fair, where mainstream pro sports fail is in the passion of the game. For all that they’re getting paid, pro players could stand to put a little more heart into what they’re doing. I’m not saying they don’t want to win every game, but their extra curricular activities distract them. Nonetheless, I’d rather be entertained by athletes that know what they’re doing than kids who ultimately don’t amount to much in the long run. The NFL is about business. College should be about the game and it’s not. It’s unfortunate that college forbids personality in football because it would make for a much more entertaining time.

Published in Archive and Just Stuff