Working at a radio station poses some very interesting opportunities. I’ve already made my “debut” on-air as myself in an impromptu discussion about World of Warcraft, but this time I got jump into one of the best characters ever. Macho Man Randy Savage. 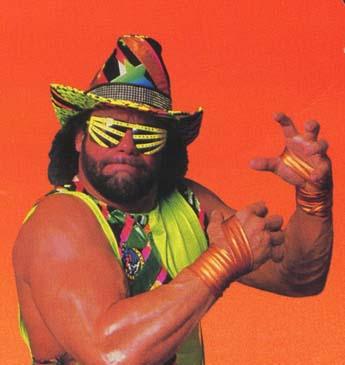 Every week on our sports talk show they do a segment called Rapid Fire where the hosts are asked sports questions and then discuss. The questions are normally recorded by a sweet voice from the promotions staff, but this week it was one of the host’s birthday and I suggested something a little special…that Macho Man deliver the questions. Mike is a big wrestling fan too, so it was a decent birthday present. The best part was that he had no idea it was coming.

So Tuesday night I watched some Macho Man interviews and studied a bit so I’d have my act down. After listening to him for 20 minutes you realize that Macho Man sounds more like an old man struggling to pinch a loaf than he does a superstar of wrestling – but whatever works. Looking back at Macho’s promos over the years, he was an incredible interview that had his persona down. Really funny stuff too, check some out on the YouTube if you can.

As for me, I sat down and belted out my best Macho Man and it doesn’t sound too bad. At least you know who it’s supposed to be, and it entertained for at least five minutes. I can’t ask for more.

So here’s my second 15-minutes of fame, enjoy.