Call of Duty brings me back

One of the best things about growing up with video games like (and when) I did, is that every next game had something new. I saw the first save feature in a game, the first time you could scroll backwards, the first time two players could play at the same time, even the first in a long line of first-person shooters. I guess that experience has made me somewhat jaded about video games these days. But every now and then a current game will prove that some games can be great even if they’re nothing new. 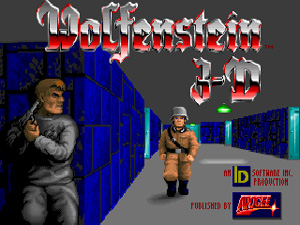 Since I was on the front of first-person shooters back with Wolfenstein, Doom, Quake, and others, every time a new FPS came out I just rolled my eyes and wondered what the big deal was. When Halo crash landed on consoles and made people drool, I was wondering what all the commotion was about. After all, I had been playing FPS games on the PC for years prior to Halo. It was nothing new, and when I finally played Halo the experience was nothing new either. Even in terms of consoles it wasn’t any different than Goldeneye or others that preceded it, except it looked much (much) better.

All the time I spent playing games on the PC – and believe me, I spent a shit ton of time – I had my FPS fill for long time and pretty much gave them up. Playing on-line with actual humans didn’t prove very rewarding either. Playing Half-Life and others over the internet proved almost impossible enjoy. Spawn snipers and others like them made playing on-line a turn off. Why go play on-line where I’d die in a heartbeat while some 10-year-old swears at me? Plus, much like RTS games, I stood strong in my belief that shooters are best on the PC and are not worth while on consoles. The controls just weren’t there even if the graphics were.

Eitherway, the genre got too hectic and too fast. Unless you devoted 12 hours a day playing. It just wasn’t fun.

Now scoot ahead about 10 years and I’m smack dab in the middle of console shooters that do deliver. Left 4 Dead put me smack dab in the middle of zombie terror and it was excellent, even if a little thin as an overall game. The action was still fast and furious, but the environment made up for it. Then recently I played Call of Duty 4 at a friend’s house and I was hooked again. Now, being the good gamer I am, I had read about CoD4 and all it’s supposed “greatness,” but alas, I just wrote it off as another clone shooter that didn’t interest me.

If nothing else, the lesson here is that you can no longer judge a game by its cover.

Call of Duty turned out to be a shooter that poved at a pace I could enjoy. It doesn’t play too fast but it doesn’t play slow, even when playing on-line with a large group. It’s also entirely based in reality, so you won’t find any fantasy laser guns or zombies (not to say zombeis are bad). And much like L4D, CoD gives you lots of sidekick players that actually help and don’t just get in the way. But if you ask me, sometimes the team tactics is a complete downer. I’m one that likes to run-n-gun a lot and in this game you can rarely do that. 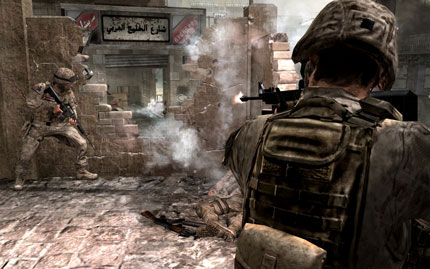 Even though Left 4 Dead has hordes of zombies, it’s overall missions were pretty weak and didn’t vary much. Call of Duty gives you a much more varying experience in terms of environments, goals, and even roles. All that makes for a much more engaging experience that has been playing solid for hours, something L4D couldn’t pull off. But I’ve found hours of military rampaging has one negative effect on me.

I was really taken aback when after playing for a while I had a most tremedous headache and felt slightly naucious. Never before had games done that to me. What it tells me is that it has been a very long time since I’ve put any effort into a shooter. Not since Quake 2 has a shooter kept me playing so long. But back when I was Quaking I had years of shooting to my credit and thus saw no negative effects. I’m going to write off these symptoms as me being out of practice. All the arcade games and Rock Band-ing I’ve been doing has made me…well…soft.

After suffering self-proclaimed hardcore gaming burnout and seeking something a little lighter (the Wii), I can now see myself slipping slowly back into the meat of gaming and also into new games. I paid full price for Call of Duty (albeit with gift cards) which is something I rarely do. I can wait for games to get marked down or be on sale. I’m not one waiting in line on release day. But as Call of Duty is still a stupidly popular game, I admit it is nice to be able to say I’m playing a game people have heard of and play themselves. While I know some can appreciate my love of games like Ikaruga, mentioning it to friends gets me some weird looks, shrugs, and comments like, “don’t you have any real games?”

I think now with Call of Duty, I have all stock genres filled in my console collection: arcade, fighting, driving, shooting, casual. I don’t do sports games, so those don’t count, although a good hockey or arcade-style sports game might find its way into my stack. And for those of you playing CoD on XBL, I’m AngryEdison so if you shoot me in the back of the head while standing the middle of a field in Russia, be sure to say Hello.