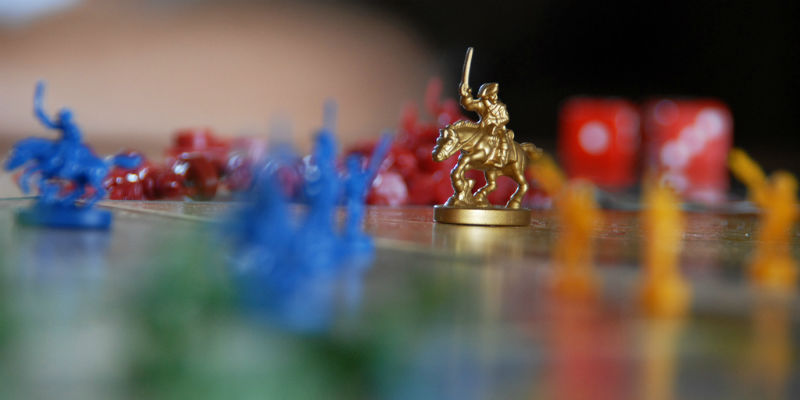 This here blog takes up but a wee corner of the internet, just like anyone else’s personal blog. Sure, I’ve had my 15 minutes of fame but for the most part I’m just rambling to myself…except for one little thing.

Risk. As in the board game. Several years ago a friend and I took a lazy Sunday afternoon to play Risk and got the point where our armies were pretty big. As is the curse of Risk, it took forever to roll the dice and go through a single battle. After that I decided to simplify the process the only way I knew how, by making a web app for it.

So I took the following lazy Sunday afternoon to make a Risk Dice Roller web page. It was just meant for me to use but if others happened to find it, so be it…and boy did they. From that point on, the Risk Dice Roller page here on Morning Toast has been the most popular thing, getting consistently high traffic numbers. And as of right now, I’m in the top results for “risk dice”, “risk dice roller” and other variations there of. How’s that for SEO? At one point, I even got approached by a guy that had made a Risk dice app and wanted to advertise on my site in exchange for a rev share. Like Dire Straits said, “money for nothing” (although that deal fell through after the guy failed at tracking sales properly).

So the Risk Dice Roller just sat there getting clicks and helping shave countless hours off of Risk games around the globe. I didn’t think much of it and didn’t do anything with it for years, until now.

As I’ve been improving my responsive web design skills, I decided to give the Risk roller a long overdue update. This not only meant giving it a new coat of paint but making it responsive as well so people could easily use the page on their phone or tablet. Here I was holding on to the top spot for “risk dice app” on Google and not really giving people anything they could use. The web app proved a good case to make use of some newly acquired web design skills as well as some front-end development magic. And overall I’m pretty happy with the final product.

The Risk Dice Roller now looks great on a phone, tablet or desktop and can be easily used on any device. No more pinching or zooming. Time will tell if this has an impact on traffic or usage. It’s hard to tell if people were leaving my page before because it wasn’t mobile-friendly but in today’s web design world, a responsive design like this is just how things need to be done.

Go ahead and compare. Here’s the old design and here’s the new design.

And don’t forget to use the Risk Dice Roller web app the next time you decide to kill a weekend playing with friends.