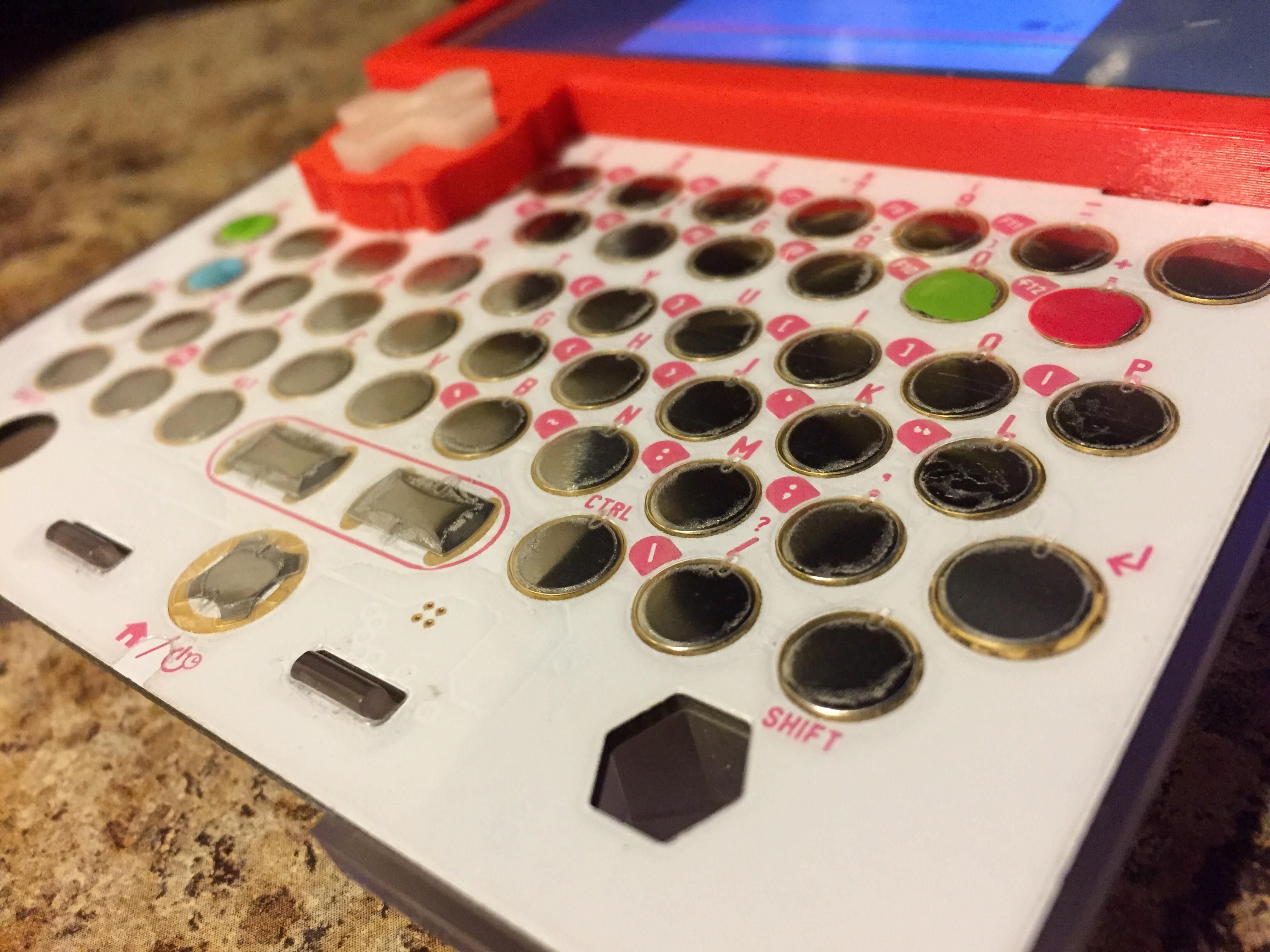 I found out about Pico-8 because of the PocketCHIP. The PocketCHIP got my attention simply because it looked cool, but once I learned you could play/make games with it, I was sold…and so were a lot of others.

The Pico-8 “console” is the marketing anchor for the PocketCHIP. Sure, it’s a complete Linux machine in your hands but they knew games would get a lot of attention. Every PocketCHIP comes pre-loaded with Pico-8. There’s nothing to install or configure…it’s just there and ready to play.

And that’s why the PocketCHIP is important to consider when making Pico-8 games.

You can also play Pico-8 games in the browser…and you can play games on the desktop, assuming you have the client (which isn’t free). But as a developer, I know that every PocketCHIP owner has direct and immediate access to my game without any extra effort.

Now, the PocketCHIP is less than ideal for handheld gaming, oddly enough. Unless you have a D-pad bezel, playing with the clicky button keyboard is not a great experience. But as a game designer, you should account for this.

It’s easy to say, “to hell with the PocketCHIP” but why ignore a built-in audience? There was probably a point when the people making Windows asked why they should bother including Solitaire too…

Despite the PocketCHIP having Pico-8 playable out of the gate, it’s still super niche, I get that. More people will play my games in a browser or through the client (although, the client is probably very niche too). And I guess lets not forget smartphones. There isn’t any official client for iOS or Android yet, but we’ll get there, and then we’re talking virtual D-pads, etc…even more of a mess.

Nonetheless, I got a PocketCHIP to play Pico-8 games so I’m sure a lot of others did too…and I want to make games for those people…for me.

Designing for the PocketCHIP means taking its weaknesses, like the awful keyboard, into consideration. Here are a few of the guidelines I follow when designing a game.

Not everyone making Pico-8 games has a PocketCHIP so many of these guidelines are somewhat out of context. Here’s a shot of my PocketCHIP with the D-pad bezel accessory.

The red and green button on the right side are the two Pico-8 action buttons. They’re located where your right thumb naturally sits given the D-pad position. It’s convenient, but as you can see, reaching other buttons on the keyboard proper is asking a lot from the player. And trust me when I say that all of the buttons are twice as uncomfortable to use as it looks…constant pressing and button mashing is a deal breaker.

And hey…if you don’t have a PocketCHIP and wonder how your game plays, just ask! Throw out the #pico8 #pocketchip hashtag and you’ll get a response, I promise. I’m more than happy to try any game.

Keep it simple, keep it fun

We know that Pico-8 has a ton of restrictions already, right? So why add more? Well…the same reason that it’s fun to make games in Pico-8 in the first place: it limits you and makes you think. These limits make you strip your game down to pretty barebones from the get go, now add some of these guidelines in and you really get down to the core of your game. It’ll make a better game in the end.

Plus, in my experience, if you make something that works for the most restricted, it’ll work for everyone else too. Simplicity is universal.

The PocketCHIP isn’t the best device for gaming, far from it…and most people don’t have one and won’t experience your game that way, but its built-in audience for Pico-8 really drives me to make a game.

Obviously, all the points above are simply recommendations. If you’re using Pico-8 to make web browser games and that’s all you want, go for it. Pico-8 is a great platform on which to make hobby games but if you’re looking beyond the PocketCHIP, there are a lot of other platforms you can use…and with far less restrictions.

And if you have any other suggestions for guidelines, please leave a comment or hit me up on Twitter. This list will grow as more people discover the fun of Pico-8 and the PocketCHIP.