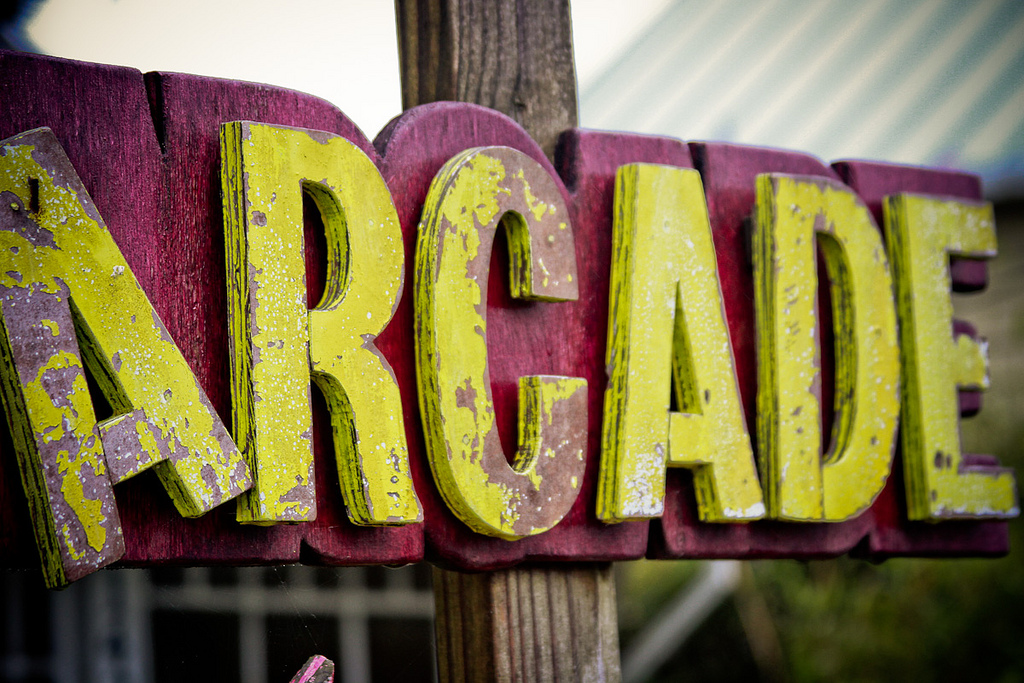 In the ruins of Aladdin’s Castle

If you gave me a truck full of money to start my own store or business, a large part of me would like to open up an arcade. Yes, an arcade, the place where people once went to play videogames and socialize. The keyword here is socialize.

I’ve spoken out against the social software movement before because I don’t understand why people seek out others like themselves. I admit it is fun and exciting to talk to someone that shares an enthusiasm about something, but there is a big difference in questing for your ilk and happening across them by chance or environment.

There was a time when an arcade was the only place you could go to play videogames. Games like Pong, Asteroids, and Donkey Kong were stand-up arcade games that cost you 25-cents to play. As the video game craze developed and gained some speed, home systems like Atari and eventually Nintendo essentially spelled the end of arcades. After all, why travel to play games for a quarter when you can play them at home for “free”?

For some reason or another, arcades also got a bad rap as a hang out for the “bad kids”. These were the schoolyard bullies in their black jackets that were supposidly on a mission to corrupt other kids and convince them to start smoking. I admit, there were some big scary kids at the arcade, but I never felt threatened. But I’m sure my mom thought otherwise.

And with that, arcades faded into the sunset without much mourning.

Despite the ability to play games at home for “less”, I will contend that arcades offer more than just wasteful time pressing buttons and dropping loose change. Arcades offered a social breeding ground. In they hey day of arcades, they were filled with kids. Kids of all types would gather to share in a single activity, playing games. Frankly, it wasn’t much different than playing after-school sports, just less organized. You didn’t have to seek out your kind to find someone to talk to, it happened automatically. You went to the arcade to play games, socializing was a side effect. In the midst of an arcade you made friends and met new people. Not to mention, you were in a “safe” place instead of running in the streets.

I think this automated socializing is missing today. We have the internet that provides us with the largest group of people ever assembled at any given time, but you have to work hard at finding people you get along with, not to mention, everyone online is faceless. Socializing with anonymity is farse. Plus, chances are that the people you become friends with online are no where near where you live. Above all else, you don’t “meet” anybody online. Everyone boils down to a bunch of text and words. There’s no handshake, no legitimate reaction to anything you do. The amount of effort you put into finding, meeting, and making friends online is absurd.

But I digress…because my point here is not people’s desire to find and make more friends. My point is that you shouldn’t have to worry about meeting new people. With specialized gathering spots, like an arcade or record store, people will come for a purpose and not have to mess with socializing. I think this scenario also results in more natural socializing between people, since you’re in an environment where your primary objective is NOT to meet people but to do something, like play video games.

I wouldn’t want to start an arcade because I want to meet people. I would want to open an arcade because I love video games. Everyone wants to share what they love with everyone else, it’s just natural. But in the act of having an arcade, people would a) have a place to go to have fun, b) find a place where each of them have a chance to be “someone”, and c) socialize.

By the way, for those that don’t remember, Aladdin’s Castle was a chain of arcades. There was one in my local mall that I always went to. Unfortunately for me, by the time I was old enough to go to the arcade on my own (even if dropped off), the arcade culture was pretty much dead.