The ultimate in classic Nintendo gaming

I’ve been a gamer for what boils down to be my entire life. The system that I hold dearest to my heart is the (now classic) Nintendo, or the NES. It was the first system I owned and the one I spent most my childhood playing. To say I was not a TV child would be a lie, but hey, at this point in life I’m pretty happy how things have turned out. I’ve lived through most of major video games eras and have see nmore games come and go than I care to talk about, but the ones I always want to play are NES games. 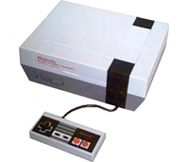 I still have my original NES console and somehow along the way gained a second. They both work and I have a good collection of controllers and the standard issue zapper gun. My collection of original NES game carts is not the biggest but I like to think of it as maybe slightly impressive…it’s about 30 games or so. Some are classics, like “Punch-Out,” some are the exact opposite, like “Wolverine.” I’ve spent good amount of time and money buying original NES games when I happen to find them. I really don’t seek them out, but if I see them at the store I’ll usually pick them up.

I will no longer have to search for game carts…but more on that later.

For quite some time I’ve also been building a good collection of emulators and emulator games, called ROMs. These ROMs are files that contain the original NES games, which can then be played with a special emulator program on the computer. This is not a clone of the game; it is the game – taken straight from the original game cart. The graphics are the same, the sound…everything. For longest time it was the only way you could play NES games without scouring eBay and dingy video game stores looking for original carts. Playing on the computer is fun and all, but it obviously is not on your TV and you can’t exactly sit on the floor and play like you could when you were a kid.

When I first started think of a more elaborate emulator system, I came across RetroZone, a company (one guy) that makes gadgets for gaming, namely a USB adapter for original NES controllers. It would thus allow you to use original controllers on your computer as a normal joystick. I considered getting one of those, but realized that’s really not what I was after. It mattered more how I experienced the game than how the hardware felt in my hand. So I kept looking for a solution. 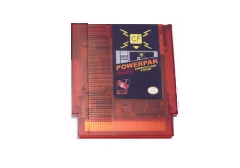 It just so happened that RetroZone not only makes the handy USB adapters, it makes the PowerPak. The PowerPak is an ingenious little device that has come about thanks to some modern technology, namely flash memory cards. The PowerPak comes in original cart form with one major difference, a slot in the front where a compact flash memory card goes…and this is a normal CF card that you would use with your digital camera, convenient, no?

What this allows you to do is put your game ROM files on the flash card, put the flash card in the PowerPak cart, put the cart into your original NES console and play it on your TV with all the original hardware just as you would if you had the original game cart. In short, you can play hundreds of games with one cart. The PowerPak has a directory system on it just as you would find on your computer. All you do is browse the folders for the game you want and start to play – as easy as that.

Is it worth the investment?

Most people would say “No,” but video games are one of my vices so I’ll say “Yes.” I’ll say yes because the cost of the PowerPak is far less than the cost actually buying each original game cart separately – even when using eBay. Trust me, I’ve looked. I’ll also vote for Yes because it’s convenient…all the games in one cartridge. The convenience is by far the biggest draw for the PowerPak. And since the PowerPak plays normal game ROM files, it means you can play import titles, homebrew titles, and other games you never got to play back in the day. 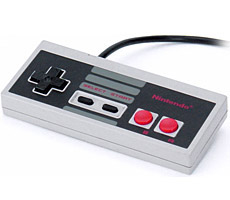 If you’re a classic gamer or more so, a classic NES gamer, you owe it to yourself to get the PowerPak and turn your collection into the NES collection you want and deserve. Now you can argue the whole original vs. emulation debate all you want, but when it comes down to it, it’s the games and the fun you have playing. As long as the game plays, looks, and sounds like you remember, then it’s all good.

But if you’re going to go this extra mile, or even just continue to play NES games with emulators, there’s a lot of tools you’ll need to make sure you get the best quality ROMs and even just the correct ROMs. I was surprised to find that over half of my own ROM collection was made up of half-assed ROMs or even just bad ROMs entirely. While computer-based emulators may forgive these things, the PowerPak does not. If the ROM is incomplete or has bad information written to it, it won’t play. Check out the forum for more on this topic.

So while most people are air guitaring and rock banding, I’ll be favoring my “new” NES collection for a little while, and I’ll be doing my best to (re)hook everyone else along the way. Game on.